In this final part, the locking techniques in Chargify's background job system will be explained.

Commonly you need a job to run only one at a time, no matter how many there are waiting to run. We refer to this as job locking, where a job running excludes another one from running at the same time, with the same type, or same arguments.

We expanded this into a more general pattern for limiting concurrency. This is a feature that has been since offered by the paid Sidekiq Enterprise version.

Its pretty easy to overload systems when using Sidekiq. If you have say, 50 job worker threads, you don't always want to be doing 50 of the same things at once.

One example we encountered was sending out 50 webhooks to a single HTTP endpoint at once. This level of concurrency can overload the remote webserver, causing the need for extensive retries and eventually failures.

Another example was export jobs; performing a slow SQL query with multiple joins, with 50 at once, could overload the database server and cause slow-downs for other users.

Slot-based limiting: Maximum of n jobs at once

So, we developed this feature to limit on how many jobs can run in parallel. Now we can scale up the number of workers without worrying about overloading anything.

For a given type of job we allocate a number of slots, lets say 10 slots for example. While running, a job occupies a slot. If no slots are available, it tries again later. 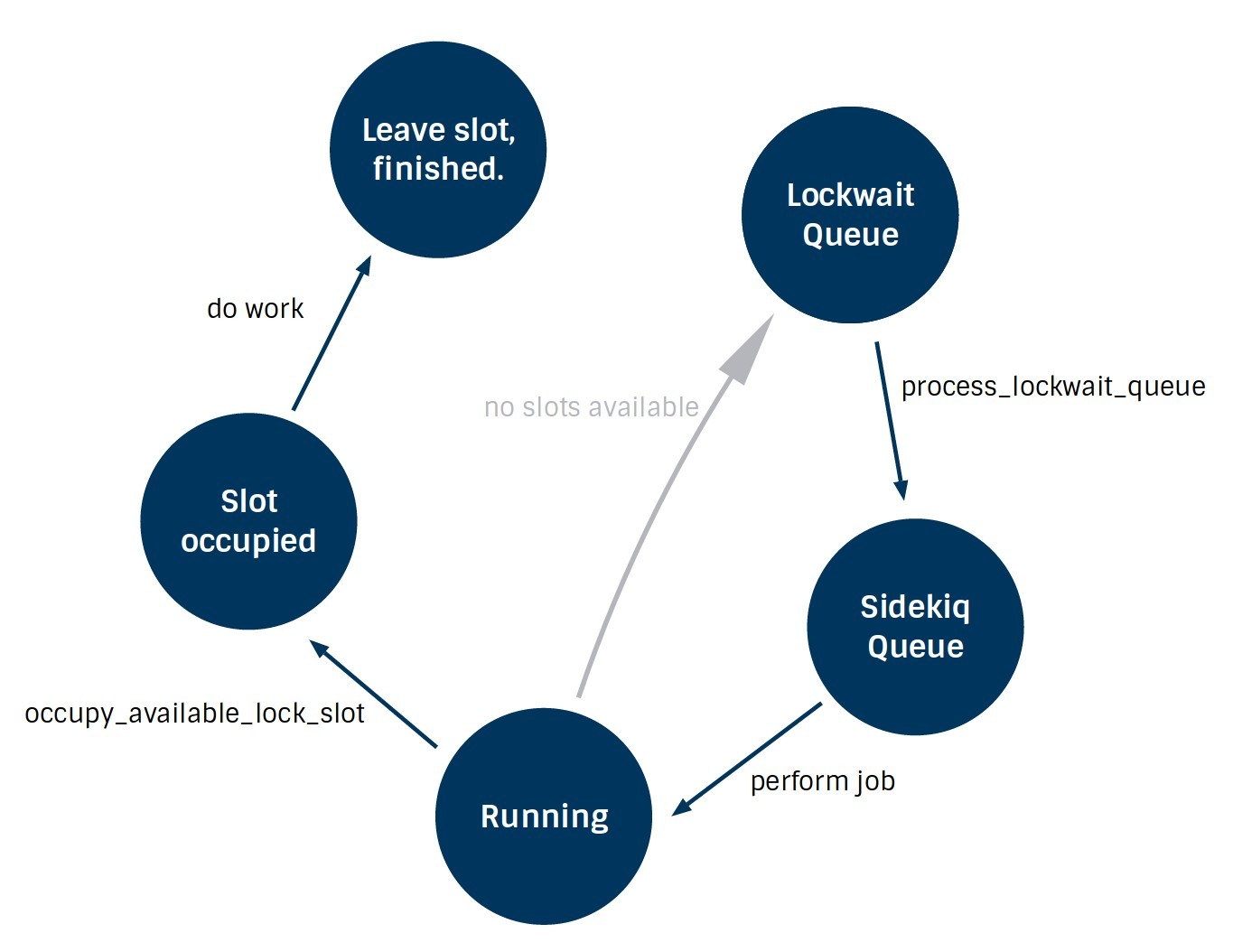 The lockwait queue is where the bulk of these jobs wait. These are invisible to Sidekiq, so they aren't picked up to run. This avoids the inefficiency of a "thundering herd" of jobs trying to occupy the same small number of slots.

The slots are implemented using a sorted set (zset) in Redis (https://redis.io/commands#sorted_set). A slot is "occupied" if there's a zset entry of the slot number. The entry's sorting score is used as a timestamp (for timeout purposes).

The lock_id is a dynamic string which is the name of the lock we're acquiring. The specification varies depending what we need. In this example, we're saying webhook jobs will have a limit of 10 per customer_id, which is one of the job arguments.

With the "not exist" mode (nx: true), the zadd redis command returns true if it added the item to the set, and false if the item was already in the set. Because redis commands are atomic, this is a true indication of whether the current job was the first to acquire the lock.

The on_busy_proc callback was discussed in part 1, and allows each job to decide whether to reschedule and how far into the future.

After all the work is done and the lock is released, the final step is process the remaining jobs by "popping" them off the lockwait queue and onto the normal sidekiq queue, to make them eligible to run.

Note: It isn't shown in this simplified code, but we do some extra work to count (in Redis) how many jobs have been popped (but not yet run). This is to avoid inefficiency caused by the race condition of multiple workers counting the same number of available slots.

Its also not shown above, but we actually store the numeric slot_limit in Redis, so this is another thing we can control dynamically in our job admin UI.

This also means we can temporarily bring slot-limited jobs to a complete halt by setting this to zero.

After implementing this system, we saw immediate improvements in the webhooks department. We had a customer who had 50% of webhooks failing over a 24 hour period because their web server would randomly get slow and stop responding. Slot limiting completely fixed it without penalizing anyone with a low rate limit.

The benefit of this over traditional rate limiting "N per minute" is a more efficient use of resources: The jobs can proceed as fast as they can within the concurrency limit. Whenever the job's work is done quickly, more can run immediately, with no time penalty.

Slot limiting has since proved useful for the less critical, maintenance-type jobs. Data migrations and back-filling of new database fields can proceed at a reasonable rate without causing excessive load.

Jobs which communicate with small web services can be limited down to the exact capacity of the remote webserver. This may also apply to 3rd party APIs where you don't want to hammer your SaaS vendor with HTTP calls.

“There is a road from the eye to the heart that does not go through the intellect.” ― G.K. Chesterton Every organization lives and dies by its culture.  For many years at Chargify we have put a lot of effort into making our engineering organization productive and healthy. This is

You've set up a new server in AWS EC2, and you want your team to be able to access it by SSH. This means authorising access via an EC2 Security Group. Best practice dictates you don't leave this port open to the entire world of hackers and miscreants, but how

At Chargify, we lean heavily on Elasticsearch for data storage as well as search, but upgrading Elasticsearch major versions requires a full cluster restart. We came up with a plan for upgrading with no noticeable downtime, although the cluster was placed into "read only" mode for some time.